History of the Hanging Flume

The Hanging Flume is much more than a crazy idea and a work of engineering art. It is a crucial link to western expansion and the promise of a new, profitable life. As railroads moved westward, the industrial revolution was in full swing changing this nation forever. 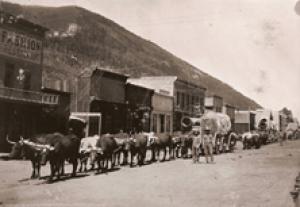 The San Miguel River and its buried fortunes not only attracted individuals, but companies backed by money from the East and the growing urban West. One such company was the Lone Tree Mining Company supported by wealthy investors from Salt Lake City in Utah Territory. They filed on several claims along the Dolores River between 1883 and 1885. The northern-most claim, the Bancroft Claim, was located just 4 miles downstream from the confluence of the Dolores and San Miguel Rivers and would become the end point of the Hanging Flume.

In the beginning, the Lone Tree Mining Company worked their claims by building a ditch and bedrock flumes. They diverted water from Mesa Creek. In 1888, they sold their claims to the Montrose Placer Mining Company, a larger, more ambitious company from back East.

The Montrose Placer Mining Company was eager to make their fortunes. Composed of investors from East St. Louis, Illinois they quickly realized they needed a larger, more reliable source of water to make the Bancroft Claim highly profitable. Just out of reach flowed the Dolores and San Miguel Rivers. The solution was hydraulic mining, and that required pressure and a lofty plan- a flume.

Flumes had been built in California for years and often required only minimal skills. In some places the flume could consist of a simple earthen ditch. To cross arroyos and washes, water could be funneled through flume boxes supported by trestles. But in these canyons, minimal engineering skill was not enough. To complete the route at the proper low gradient, the Flume would have to traverse seven miles of sheer rock walls, at times suspended hundreds of feet above the river.

This enormous feat needed a skillful and experienced leader, and that leader was Nathaniel P. Turner. His knowledge of flume construction turned the lofty plan into a reality.

With such a large task at hand, finding men to do the actual ‘grunt work’ and construction was easy, but finding someone with the necessary skills to engineer the flume was difficult. The Hanging Flume needed a skillful and experienced leader, and that leader was Nathaniel P. Turner. His knowledge of flume construction turned the lofty plan into a reality. We have no pictures and only the barest clues about his life. We do know that he was a shareholder in this business venture. Hopefully somewhere, somebody knows more about him.

The Flume was constructed using earthen and wooden canals, wooden bents and a wooden box that were secured together by iron rods and fasteners. Without photographs, engineered drawings or written accounts of the Flume’s construction, experts can only speculate on how it was built. In 2004, a group of scientists set out to unravel a complex and fascinating story with dimensions that went far beyond ordinary technical questions. It is estimated that 25 men worked on the flume and used local materials. The iron rods were custom shaped on-site by hand. The wood for the beams and trestles was logged from nearby Pine Flats in Utah and Carpenter Ridge in Colorado.

To reach the water pressure necessary to adequately mine the placer deposits, the Hanging Flume had to achieve a .17% grade – that’s only a 90 foot drop over the near 10 mile long Flume. Without today’s sophisticated equipment, we can only speculate that they used triangulation to stay on track. Many mysteries remain, and investigation continues into the wonder that is the Hanging Flume.

Fate of the Flume 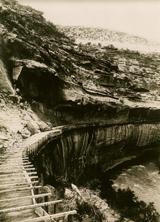 Built over the course of three years, from 1889 to 1891, it functioned for another three years as various owners struggled to turn a profit.

After Montrose Placer Mining Company went out of business, Nathaniel Turner and his new company, Vixen Alluvial Gold Mining Company (Vixen), attempted to extend the Flume to the other three mining claims downstream, but they were under-funded and unsuccessful.

The end of the venture was sealed with “The Panic of ‘93” when Wall Street futures came tumbling down in 1893. Just like today, the effects of Wall Street encompassed the entire nation including Colorado’s western frontier. In the end, the Hanging Flume was considered a failure. It was left hanging on the sandstone canyon walls, and all that remains is what you see today. 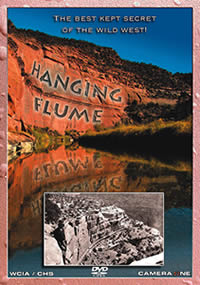